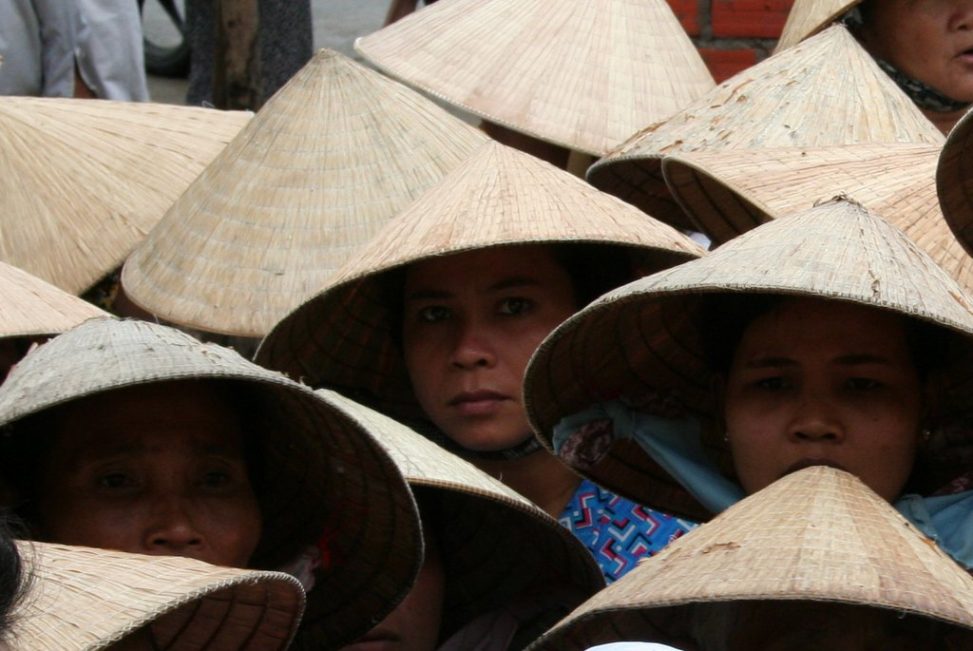 Passing Out Rice In Vietnam

This was written in 2004, by Kim Luu.  I found it on the computer, and am sharing it here because it’s really a good read.   The pictures are from a more recent trip to Vietnam that Kim took in 2010, with her mom and others from the Buddhist temple that her mom is active with.

“Laa”
Vietnam – 2004
Our cameraman is doubled over in the backseat.  His stomach isn’t feeling very well.  Whether it was something he ate this morning or last night is anyone’s guess, but for the moment, he’s just sort of hunched over and clutching his stomach with a blank expression on his face.  My mom is sitting next to me, and she seems awfully quiet too.  I look at her and she seems to have that I’ve-been-riding-over-one-pot-hole-too-many look on her face.  As for me, I have goosebumps that shrivel my arm down to the bone and make my arm hairs look like sorry tent poles buckling under the pressure of my draping skin.  It’s cold; sure, it’s the middle of June and the equatorial Vietnam heat is searing down on our cream colored Mercedes Benz minivan (which are actually cheaper than Toyota Corrollas here) but the air conditioner is apparently calibrated to the post-menopausal women setting.  At any rate, I am cold.  My mom is carsick.  And our cameraman has the stomach flu.

We are a minvan full of eight: me, my mom, her friend who I call Aunt Nguyet (one of the dozens of unofficial aunts, uncles, cousins [i.e. friend/neighbor/stranger/taxi driver/lady that I buy roasted duck from at Sam Woo’s] I have that accompany the secret Asian handshake), Aunt Nguyet’s two sisters and one brother who I call Aunt, Aunt, and Uncle (Aunt and Aunt are distinguished from one another based on my eye contact; it’s a very precise process), the cameraman and the driver who I call Uncle Camerman and Uncle Driver (and no, I’m not kidding).  After informally gathering donations from family and friends back home in the States, my mom, Aunt Nguyet, and I have returned to Vietnam and are spending part of our vacation passing out rice to poor people.  In a country where $200 in US currency will house and feed a family of four comfortably per month, and where $40 a day will rent you a driver and an air-conditioned Mercedes minivan that seats eleven, and pay for gas, poor is an extremely relative term.  Uncle Cameraman, or Brother Cameraman as my mom and Aunt Nguyet call him, is here to videotape the day’s events.  Aunt Nguyet’s siblings live in the area, and have helped plan the logistics of our trip.

It is 6 o’clock in the morning, and we are only 30 minutes into our journey from Phan Thiet to the town where Aunt Nguyet’s brother still lives, and where we are supposed to be at 9 o’clock to pass out rice.  The only problem is that Uncle Cameraman has some sort of queasy stomach and isn’t looking so good.  When he isn’t doubled over, he’s hunched over.  Either way, he doesn’t look very happy.  Aunt and Aunt think the best way to cure is to stop by their Great Aunt’s house to get “laa” treatment, which I’ve never heard of before.

We pull up in front of a house and walk through a front yard with chickens and geese.  The double doors are wide open, exposing a living room with a simple but beautiful wide solid wood coffee table that, when accompanied with a thin bamboo mat, doubles as a twin sized bed.  Great Aunt walks into the room, surprised but not shocked that seven visitors have materialized from nowhere into her living room.  Aunt Nguyet explains that Uncle Cameraman isn’t feelings so well and before she can get the second vowel sound of “laa” out, Great Aunt has gone into the other room to fetch her “laa” supplies, which apparently consists of a wad of folded paper.  Uncle Camerman lies down shirtless on the wooden bed.  Great Aunt unfolds the paper and removes a shard of razor blade about the size of the tip of an Exacto knife.  She cleans the razor blade using the hem of her shirt, wipe wipe wipe, before proceeding with business.  She hovers over his belly button and makes a light surficial incision just above the belly button.  A small drop of crimson emerges.  Great Aunt’s chapped fingertips squeeze out more blood like a giddy teenager on a mission to pop a stubborn pimple.

Aunt Nguyet, Aunt, Aunt, and Uncle nod in agreement.  My mom is still savoring the unmoving ground and doesn’t say much.

I am fascinated but a large part of me wishes that Great Aunt would just put on a pair of sturdy latex gloves before she does any more of that bad blood wiping.  At the very least, I hope her dermis and epidermis are in good condition. 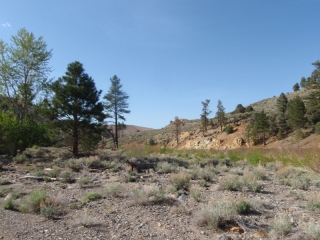 I ask Uncle Cameraman if it hurts.
“It doesn’t hurt.  It just feels like a mosquito bite, Child (yes, he calls me Child- but not in that Pope sort of way, just in that reciprocating you-call-me-Uncle, I-call-you-Child sort of way).”
(As an aside, I later find out that he looks older than he actually is.  In fact, he’s only four years or so older than I am.  He asks me how old I am.  It turns out I am 26, not 15 as he initially estimated.  I feel moronic to have called him Uncle.  Most of all, I feel moronic to have responded to Child.  I immediately re-adjust his title to Brother Cameraman.)

Great Aunt picks up her Exacto knife tip and resumes the position.  Moving upwards, she is hovering over Uncle Cameraman’s rib cage, where the bottom ribs meet right below the sternum.  She repeats the process:  nick, wipe wipe wipe, clean on shirt hem.  She them moves up to his clavicle, the small dime sized indentation between his collarbones.

Okay, so I watch.

It’s just like Jackass, but live, better, and in a different language.  It’s a cultural experience, I tell myself.  Uncle Cameraman doesn’t even flinch.  I don’t know about what kinds of mosquitos he’s accustomed to, but they’re probably the kind I never want to encounter if they make you that comfortable with an old lady hovering over your clavicle with an old razorblade. Nick, wipe wipe wipe, clean on shirt hem.

Great Aunt moves on to his chin.  Nick, wipe wipe wipe, clean on shirt hem.  Her movements are practiced and systematic.  I wonder if she accepts Blue Shield.  …Or at the very least PPO.

Great Aunt proceeds to the spot between his eyebrows.  Nick, wipe wipe wipe, clean on shirt hem.  I wonder if his nose feels left out.  Peer pressure will do that to you.

Great Aunt gives her razor blade a final wipe on her shirt hem and tucks it back into the wad of paper.

“So do you feel better yet, Uncle Cameraman?” I ask.

Aunt, Aunt, and Uncle tell me that these things take time to kick in, and that he should be fine by the time we to Uncle’s town.  We thank Great Aunt, and leave to get back on the road.

Having rested, my mom looks much better.  She looks alert enough that I ask her why I’ve never heard of “laa.”

“We’re from the city.  We don’t do that.  Laa is something that people in the countryside usually do,” my mom says.

“Is that why Grandma always scrapes my back raw with a coin dipped in medicated oil instead when I get sick?”  I ask.

When we get back into the car, my mom pulls a Tylenol out of her purse and slips it to Uncle Cameraman.  “Here try some of this, Brother Cameraman, it works great.”

I had, Friday and Saturday, the best contest I've ever had. I was on fire and it felt incredible. This...