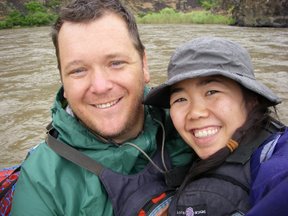 5 Day River Float on the Lower John Day + Climbing at Smith Rocks + The Oregon Mountains
May, 2008

A few months ago, my old climbing buddy Brian emailed me. I hadn’t seen him in 8 or more years, but we’ve stayed in touch. He’s retired from climbing these days, but has taken up rafting with enthusiasm. He was listing his plans for the next few months, and I invited Kim and myself along. The trip grew into a full week vacation for Kim and I.

I was busy the week leading up to the trip, and didn’t get everything as organized as I wanted. We didn’t end up leaving until Sunday morning, with the Honda Fit loaded with camping gear, climbing gear, fishing poles and more. I’m always impressed with how much that little car can hold. We headed north, and after a pretty drive of about 6 hours, we arrived at Brian and Cindy’s nice little house in the woods of Oregon, about 25 miles south of Bend.

After a short rest, and my jealous inspection of Brian’s enviable shop and garage, (sooo much storage!) we began to organize. We packed some gear, packed coolers, and loaded the van for our monday morning start. Dinner and bed. 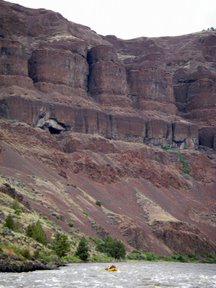 Monday we rose early, hopped in the van and headed north. Oregon is pretty, and the drive went quickly. Once at the river, we loaded the rafts. It makes kayaks seem very simple! Of course, when loading kayaks you don’t get to pack coolers and camp chairs.

Before long, we were pushing off, and heading down the river. The flow was pretty good, around 7,000 CFS, and would rise to over 12,500 CFS while we are on the river. I should mention now that although I’ve paddled many kayaks, my rafting experience is very limited. I rowed a few hours on the Grand Canyon, but really just in flat water. We were on an oar boat, meaning that I was rowing the boat with a single pair of long oars. These oars give you considerable leverage over the raft, but things happen in slow motion compared to a kayak. It’s like driving an 18 wheeler versus a motorcycle.

We headed down the river, and it wasn’t long before we were in some fun Class II rapids. Nothing big, but in the raft they felt pushy and I was paying attention. Just an hour or so into the paddle, Brian signaled to eddy out and scout. We climbed a small hill, and scouted what looked liked an easy Class II rapid. Brian and Cindy (who had done the river before) thought this was the Class III rapid, but had washed out. We returned to the rafts and ran it without incident. Brian announced that “you’ve now run the hardest rapid on the river” and I relaxed a bit. I was starting to feel like I understood this rowing thing.

Not 5 minutes later, we came round a corner. I had taken the turn wide, and ended up in a shallow rock area. Cindy and Brian were heading into an eddy, and signaling me frantically. I was struggling with the oars in rocks, and missed the eddy. As we floated past, I hear them yell, “This is the Class III”. I turn the boat, and look at what appears to be a pretty straightforward rapid, but with some pretty big waves (remember, this is a class III rapid at most flows, some reports call it IV, and we’ve got high water.). I can see the line, and row furiously to get us on line. We hit one big wave, then another, then another. As we head into the biggest, I’m feeling pretty good. We hit and I learn something about rowing. Those long oars give the boatsman great leverage, but also allow the water to impart great leverage on the boatsman. My oar catches, and before I know it, I’m FLUNG from the boat. The cold water, and the fact I’m in it, is quite a shock. As I come to the surface, I swim rapidly back to the raft, but struggle to get back on board. All the while I’m worried aobut where the raft is going, and what will happen to Kim. I yell at her to climb back on the raft, and she does, taking the helm and beginning to row. I explain that I want her to help me back into the boat! She does, and soon I’m rowing again. Whew. We make it through the rapid upright, and though I’m a bit cold, the only casualty is my Teva sandal, which ripped.

From here out, the river was mellow. A few class II rapids, but mostly pretty easy. Fun rowing, and gorgeous. Each afternoon we’d find another amazing campsite. The river certainly had the feel of a 1/4 scale Grand Canyon in spots, and we saw wildlife including river otters and bighorn sheep. (see the pictures.) Pretty, relaxed, and fun. We ate well, with meals including Pad Thai and Shrimp Artichoke Pesto. It was one of the most plush non-guided camping trips I’ve ever done. After the Grand Canyon, Peru, and this, I might be getting soft.

We were on the river for 5 days. Super relaxed, super fun. We fished some, (no luck really) and read lots. It was nice, and Brian and Cindy were good river companions. 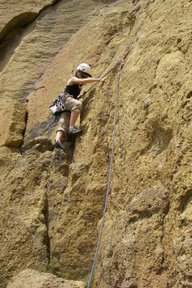 After the river, we returned to Brian and Cindy’s. Went Fishing that evening, and then got up early to head to Smith Rocks. We stopped in Bend, which is a super cute mountain town. Walking around, we spotted a church garage sale, where I got a killer deal on a used pair of snow skis and boots. Score. A yummy breakfast, and we finally got on the road to Smith Rocks. I’d only packed Sport climbing gear, so we were limited, but what an amazingly cool place. Neat rock, gorgeous, and fun climbing. I’d like to go back. Storm clouds threatened, but we got 5 climbs in before it was time to head home. Really, really neat. 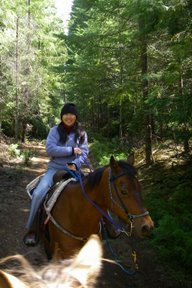 We decided to take the scenic route home. We headed Southwest from La Pine, and were soon driving through gorgeous pine covered mountains. It was a bit cloudy for Crater Lake, but still gorgeous. We left there, and continued west, following the upper Rogue River and several other creeks. Some impressive tall waterfalls, and a short horsback ride filled our day with fun an scenary. Spectacular.

Proof that you don’t have to go far to have a great vacation and a bit of adventure.

Cache Creek with Paula and Erol

Kim and I headed over to Cache Creek today. We met our friends Paula and Erol. They were renting a...