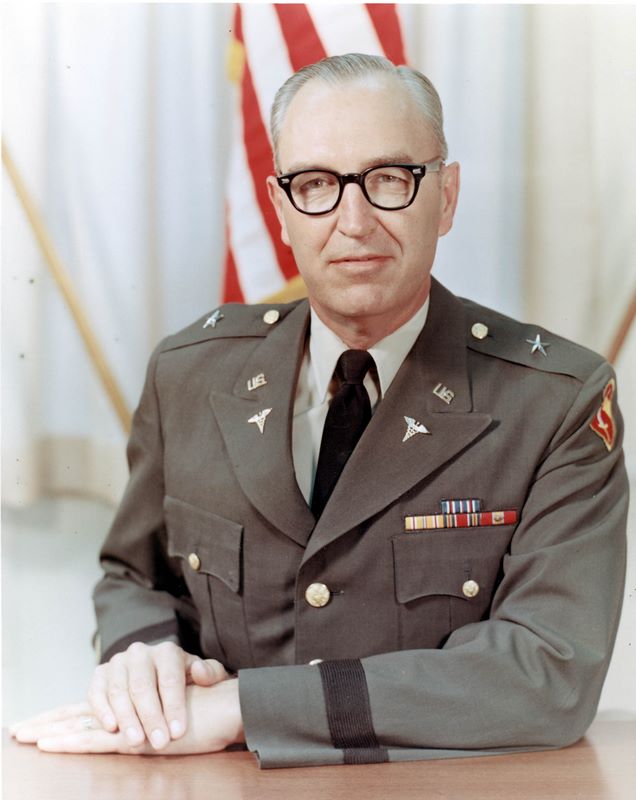 My Grandpa Jennings passed away a few weeks ago. Kim and I traveled to
texas for his funeral, which was a celebration of his life, and honored
his long and decorated military career.

My mom and Ron married when I was 6. On that day, I gained a bonus set of Grandparents, and I consider myself extraordinarily lucky to have them in my life. My Grandpa passed away a few weeks ago, at the age of 92. From my earliest memories, my Grandma and Grandpa Jennings accepted us and treated us like grandkids, like we’d been there all along. I never thought of him as a step-anything. He was my Grandpa, and a great one.

He retired in 1975, the year I was born, and years before he came into my life. He had a long and well decorated career as a surgeon in the Army. He received his MD degree in 1941, the year the US entered WWII. He served in the South Pacific during the war, and remained in the Army until 1973. He trained as a plastic surgeon during the 50’s, and did a lot of work helping burn victims and children born with congenital defects. He achieved the rank of Lieutenant General (3 Stars) and while serving in Vietnam, was appointed Surgeon General of the Army. He would hold that position from 1969-1973, when he retired from the army. ( Go here for a history of his career.)

My first real memories of my Grandpa were from the summer after the wedding. I guess it would be the summer of 1983. They were living in South Carolina at the time, and there was a beach house rented. My family drove out from Texas, and my new Aunt, Uncle and Cousins drove out from Ohio. This new family spent a few weeks living in this beach house, and it was great. I remember a few things in particular. Going fishing with Grandpa, and him teaching me to fish in the surf. I caught a small shark, and it was a proud, proud moment. We went crabbing too, using small round traps to catch crabs in the tidepools. That simple meal of shark and crab is one of only a few meals in my life that I’ll never ever forget.

I remember being impressed by my Grandpa. He seemed to know so much. He was tall, with big strong hands. Just being near him made everything seem ok.

Over the years, the thing I remember most about my Grandpa, other than just being loving and caring, was his curiosity and thirst for knowledge. When computers started moving into homes in the 80’s, my Grandpa had one. When the web became popular and email more common, Grandpa was there. How many 90+ year old Grandpas use email? It didn’t matter how silly the joke, it always made me smile to get a FWD: from my grandpa.

When my Mom, Dad, Katy and I took scuba diving lessons in my early teens, I remember Grandpa wanting to see the equipment, and wanting to understand what each piece did, and how we calculated safe limits for our diving. Similarly, when I took up climbing in college, I remember spending a long time with him going through each piece of gear, explaining it’s function and proper use. Grandpa wasn’t going to be taking up climbing or Scuba diving, but he was genuinely curious about the things we were interested in.

The last time I saw my Grandpa, he was in the hospital. He’d been sick for quite some time. We picked up my Grandma and drove her over. She’d gotten dressed in a nice outfit and done her makeup. My parents had warned me that he wasn’t well, but it was still shocking to see him. His body had shrunk to nearly nothing. But his eyes lit up when we entered. We hugged, and his hands felt familiar. They shook, but still had strength and that familiar size. It was a great visit. We showed him pictures of our trip to Peru, and he asked about the Incans and the difference between an Alpaca and Llama. He told us of his trips to Brazil, where he had worked with a hospital. We talked about my company, and he asked how things worked. The visit was short, Grandpa got tired fast. As we left, he and my Grandma kissed like teenagers. I tried to keep my cheer up for my Grandma, but walking out of that room was one of the hardest things I’ve ever done.

A little over a month later, I got a call from my parents. Grandpa was tired, and was asking for the cessation of treatments. I asked if there was time for me to fly to Texas to see him one last time, and my Mom tearfully told me that she didn’t think he’d know I was there. I couldn’t sleep that night. It was just a few days later that I got the call that he had passed away.

I’ll miss him a lot. I’m sad that my kids will never know him. I feel lucky that I did.


The following week was the funeral. Kim and I flew to Texas on Thursday morning, and my brother picked us up at the airport. We spent the afternoon with my parents, Grandma, and my extended family. Dinner and the hotel for bed.

An early start Friday for the funeral. We drove to the Army Retirement Community, where there was a service at the Chapel. The chapel was filled with family, old friends, and army representatives. It was simple service, with words from a religious leader. My Dad spoke, and for the first time in my life, I heard his voice crack slightly. I cried.

There was a reception afterward. People reminisced about the person he was, and I heard a few stories I’d never heard before. My Mom had made a gorgeous scrapbook that chronicled his life and career, and people took time to admire it and remember who he was. It was pleasant.

We had a private family lunch afterward. It was the first time in many years everyone had been together. As my cousin and brother talked, and my young niece and nephew played on the floor, I found myself really enjoying the moment, having everyone there. And then I was sad. I knew my Grandpa would have loved to be there.

After lunch we went to Fort Sam, to the National Cemetery located there. My Dad had told us the ceremony would be elaborate, reflecting my Grandpa’s service and position in the military. We arrived there, and the pavilion was surrounded by soldiers standing at attention. A short distance away was an army band. A few hundred feet away were three cannons, and standing behind a tree was a bugler in full dress uniform. We were seated, and the sound of a lone drummer and horse drawn carriage was loud in the still cemetery. A flag draped coffin was on the carriage, holding the urn that contained the ashes of my Grandpa. It was followed by a riderless horse. The horse carried an empty pair of boots, placed backwards in the stirrups. The procession wound it’s way through the cemetery, and finished at the pavilion. The urn was removed, and placed front and center. It was an emotional day, so I forget the order of events, but at various moments there was a somber song played by the band. A bugler played Taps. The cannons were fired 15 times. 21 gun shots were fired. A flag was folded.

Two solders took the flag, and in deliberate and measured steps, folded it to present to my Grandma. Each step was slow, and punctuated. Each transfer of the flags was done with a salute. It’s hard to describe. I can’t even tell you how long the ceremony lasted. Each step was designed to honor his life and service. A flag was presented each to my Grandma, my Aunt, and my Dad, all done by high ranking military personel.
(If you are interested, this site explains the history of the military funeral service.)


That evening, we had dinner together as a family. The following day, we visited the Army Medical Museum as a family, then another dinner. On Sunday, as people headed home, my Dad had some business to talk over with my Grandma. Kim and I went to San Antonio downtown,before bringing my Grandma ice-cream. We sat and talked for another few hours, then it was time to leave. It was sad leaving.

Would you like to always get emails when I update this page? Enter your email below and you'll get all...