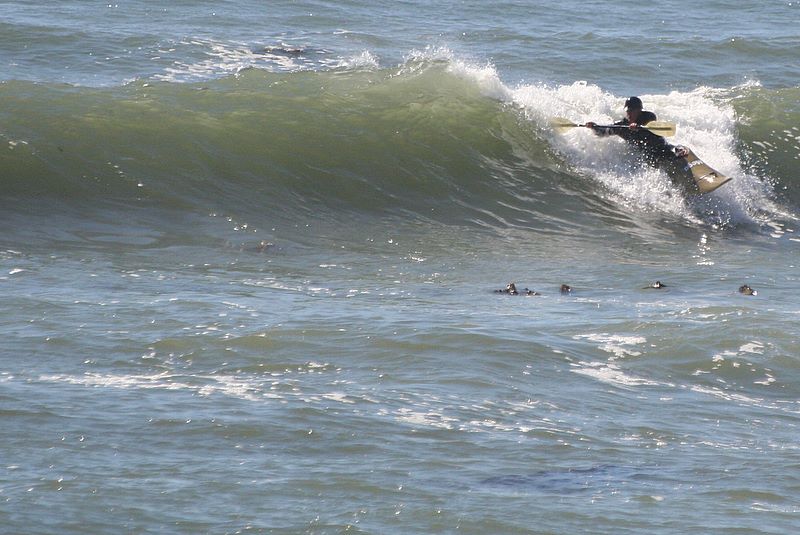 First of all, a big thanks to Demany Smith for putting the contest on. It was fun. Good to see everyone, a good vibe. I showed up early Friday, and headed out to surf with Buck, Eric, Vince, John B.,Jared, Graham, Dennis Judson and others. There was some swell, and lots of wind. Lots and lots of wind. I stayed out till nearly lunch, getting some good rides, and paddling constantly just to stay in one spot. Dennis St. Clair showed up around then, and we sat and chilled on the beach until about 3, when Lucy showed up, and the 3 of us headed out. The wind was insane, but occasionally fun rides were still available. Around sunset, it was into town for dinner with Chris and Dennis. Desmond showed up with my wife Kim, he’d been kind enough to give her a ride down. After dinner, it was back to camp, where I crashed hard after 7+ hours of paddling.

Saturday the waves had dropped a little, but decent waves still rolled through. the heats were varied, some heats had way better waves than others. I paddled OK, but didn’t seem to be finding the waves I needed. Going to have to work on that. Ended up with 2 seconds in my heats saturday, but 1st place was Dave Johnston and Jono Stevens. (IC heat and HP heat) who are both incredible paddlers, so that takes the sting out. Lot’s of waiting around at contests. Heats ended at 1 or so, and bunch of people went out for some fun free surfing. Then Kim and I went to Santa Cruz, and walked around on the boardwalk. Cheesy, but fun. Dinner downtown, then back to camp late again. (we barely saw our camp mates!)

Sunday – We showed up to small waves. Demany moved the contest to the south peak, and there were some small but ridable waves coming through. The ability of some of the competitors to pull of impressive moves on some pretty mediocre waves was incredibly impressive. I’m not even sure how I did Sunday, but I didn’t make the finals. Oh well. Next time!

It was a great time.

Kim and I are going on a trip to Peru in November, and part of it will be an extended...