Anna Mae Hays was the first woman to achieve the rank of General in the US Army. She passed away today at 97, and I found learning about her career very interesting. I actually remember learning about her before today, but wasn’t aware of the connection to my family, though it makes sense considering the overlapping careers.

In the NPR remembrance of her it begins with an audio clip of the scene pictured, when she received her promotion and Star. in that clip, the General on the left mentions the General on the right, my grandpa Lt. General Hal B. Jennings*. (the clip sure sounds like he said Jenkins, but it’s definitely him. )

A nice article about Anna Mae Hays from her 90th birthday, where I saw this photo today for the first time.

And this is super cool, video of the ceremony, including a very nice speech by General Hays at @10 minutes. My grandpa passed away 10 years ago next month, and I miss him. I’d never seen this, but my brother Nick found it. Very neat.

The clips of the “new protocol for lady generals” seem dated and uncomfortable, but it’s nice that General Hays gets “General Jennings” correct.

*Hal B. Jennings was Hazel’s namesake. She was given his initials. 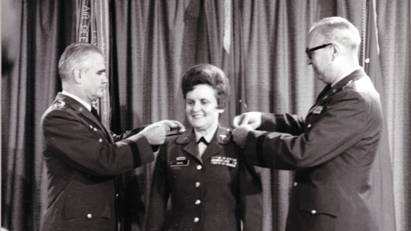 Rappelling, Jumping, swimming and hiking My college friend Jayson Owens was in town for a work trip, and we were...